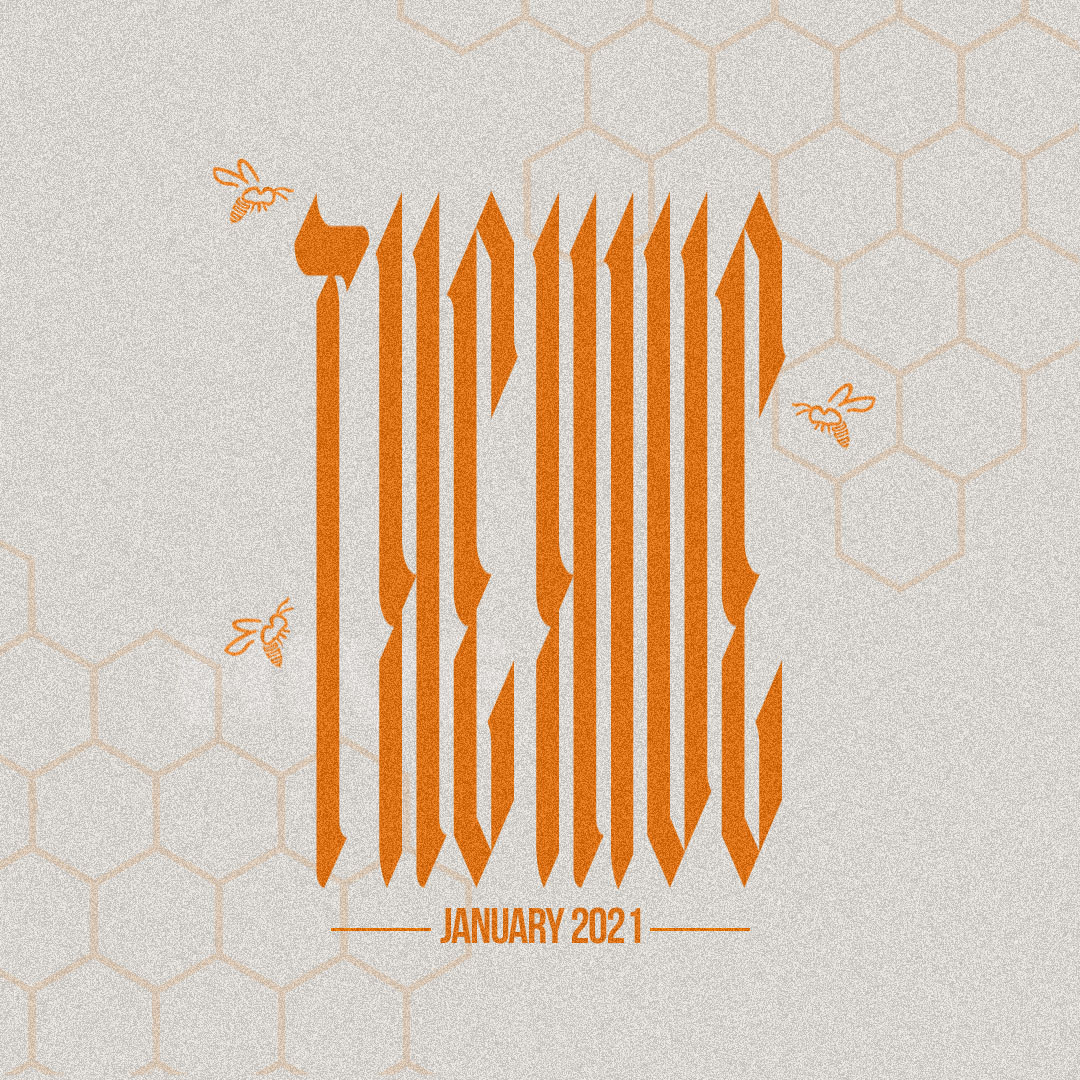 If there’s one thing that can be said for this flat, dreary January (especially if you’re in the UK), it’s that 2021 has started with such optimism in the music department! So many great producers and labels, new and old, are already coming through with the goods in this brand new year. Here’s what I’ve enjoyed this month…

Dubstep’s wonderkid Ninety, began with what is set to be a big year for his zany productions, debuting on the equally soaring LDH Records. The Liverpool based imprint deservedly took the top spot as best new label at the DUPLOC Awards last month and began 2021 with suitable vigour. Ninety delivered two of his increasingly distinctive riddims for LDH008, brimming with his usual quirky inflections. Both ‘Spin‘ and ‘Movement‘ provide vivid communications of extra-terrestrial life forms, chattering over twisted sub-low frequencies designed to shift tectonic plates. It is the aggression of ‘Movement‘ however, that has me repeatedly exposed to alien abduction.

No introductions necessary, it’s a great pleasure to see the pioneering Distance refuse to slow down after all these years. In fact, I’m certain his productions are only getting better and gaining in magnitude! Recognising DUPLOC‘s incredible work over the years, Distance blessed the leading platform with three of his most recent high level creations for DUPLOC040. The OG displays his larger than life synth work on the catchy and uplifting ‘Sacrifices‘, his signature skull cracking percussion on the moodier ‘Overcome‘ and thick, tangible textures on the booming ‘808 Snake‘, my favourite of the three. DUPLOC040 is a well rounded release encapsulating Distance‘s ever expanding cinematic sound.

I’ve had my ear out for Møndaigai ever since I caught his wicked ‘Decays’ EP on Subotage Records a couple of years back, so it was great to see the Japanese producer land on FatKidOnFire for the label’s first release of the year! For FKOFd049, Møndaigai presented four heart stopping tracks, plastered with his characteristically raw and aggressive sonancy. With plenty of industrial power and overwhelming intensity, the Tokyo based producer begins with my favourite, ‘Sledgehammer‘, before continuing into the deep, atmospheric rumbles of ‘Element‘. The energy picks up during the rough, oscillating synths of ‘Shockwave‘ in preparation for Møndaigai‘s finale piece, ‘Hallelu-jah‘. A last minute barrage of punishing kicks and devastating grit; this is not an EP for the feint hearted. Fierce and distinctive, Møndaigai is just one of the many flames burning within a raging fire of amazing talent emerging in the east.

As I immersed myself back into the genre circa 2013, Biome was one of the first producers I became attached to. Dark and future-facing, the Manchester producer has consistently brought the goods, sometimes criminally underrated. But that certainly wasn’t the case for his latest release where his commitment reached a pinnacle point, landing a debut EP on the dominating Deep Dark & Dangerous. Biome stuck to his guns for ‘The Joker‘ EP, producing three infernal tracks journeying through a variety of bass weight pressure, from the fuzzy reeses of ‘The Joker‘ with it’s dizzying switches, to the tougher and wackier ‘Monster‘. Biome certainly indulges in fresh, amusing sounds throughout the EP, full of character and charm, but it’s ‘Boxed‘ that I’ve been returning into, the dark and minimal cut of the three and one that features that crucial Biome sound.

With the turn of a new year, what better time to discover a brand new artist on a brand new label? And with an incredible EP at that! Canadian newcomer Kairo, knocked me off my feet with a huge three tracker for Obsidian‘s maiden release. ‘Loto‘ EP batters the speakers with three servings of low end wizardry. Whilst Kairo opens with the cosmic powered ‘Bisou‘ and closes with the palpable apocalyptic darkness of ‘Loto‘, sandwiched between is the essential ‘In The Beyond‘. I have to shout out the Deep Tempo boys for putting me onto this one during their final show of 2020. The initial fluttering bassline on this is breath-taking and downright dangerous, the spaced out vibe is as vast as it is suffocating. I think we need to keep our eyes and ears out for more Kairo and Obsidian madness later this year…

With a fresh year comes a fresh start for Hijinx. Formerly Mr.K, the UK producer looks to broaden his horizons with a new alias and move forward into a new creative direction. He began his new chapter with a filthy release on Navy Cut, a label coming off the back of a thoroughly successful 2020. Hijinx teases his new direction across three system testing tracks. From the fiendish chest rattling stomps of ‘Venom’ to the dangerous low end movements of ‘Tru‘ and long time dub ‘Addict’, you could say Hijinx is the beginnings of a menacing mutation of the retired Mr.K. The vinyl has predictably gone in a hot minute with the digital arriving February 22nd.

Hebbe has become quite the spearhead of the genre over recent years, featuring on a who’s who of high profile record labels and most recently, co-founding one of the most exciting new labels in Basskruit. However he began 2021 by releasing two of his biggest, most sought after dubs, ‘Quiche‘ and ‘Looters‘, the latter being a 125bpm banger. Growing Dutch label Next Level Dubstep had the honours of handling such heavy goods, and did these two monstrous, long awaited tunes justice with a beautiful piece of marbled wax.

Still on top of his game after all these years, DJ Madd displayed all of his legendary prowess to the fullest for ‘Soldiers‘ EP on Badman Studios. Reminiscent of his classics such as one of my all time favourites, ‘The Life You Chose‘, DJ Madd laid out four tracks of minimal mastery. A pick ‘n mix of deep sub-low incisions and dark sporadic synths for the most part, with the opening ‘Babylon Scatta‘ providing the most dominating bass driven energy of the four.

An original production by Pharma, ‘Formula‘ experienced a plethora of remixes since it’s release and garnered such positive responses, that the Austrian originator decided to supply the demand with this superb remix EP. Including the original ‘Formula’ taken from last year’s ‘Sudo’ EP, Pharma unleashed a cut throat VIP alongside Alienmade‘s heavyweight take, a ruff ‘n tuff remix from Dalek One and Tinky‘s highly sought after remix, taking it from a ponderous, eyes down design to a powerful sound system weapon in it’s own right.

DPRTNDRP‘s 786 Recordings project is one hell of a label that’s featured nowhere near enough on H&B. After a couple of years of incredible vinyl exclusives and other unmissable EP’s, the imprint returned this month with a first compilation project. Featuring a bunch of first timers on the label and the 786 heads themselves, ‘Mortal Kombo #1’ yields some of the most impressive material that’ll be heard this year. And that doesn’t come as a surprise when you see the line up, all of which involve some mighty collaborations. We’ve got DPRTNDRP teaming up with a Mr.K swan song for ‘Suppression Dub‘, rising heavyweights Quasar and Nova bring the magic with ‘Witchcraft Dub‘, Saule and Centauri combine for the maniacal ‘Tyrant‘ and the unstoppable Teffa hooks up with Sound Unknown for throbbing low end action on ‘Hide & Seek‘. Like much of the 786 Recordings catalogue, ‘Mortal Kombo #1‘ EP is certified cutting-edge sound system material and perfectly curated.

There were only a couple of Weekly Buzzes this month but they certainly aren’t to be missed! The emerging Substrada announced himself with the spooked out ‘Eerie Lab‘ EP on the hot streaking Basskruit. Check out BSSKRT004 here.
And on a slight deviation, we enjoyed the sounds of Manuka Records who curated a short dancefloor rousing compilation featuring Ternion Sound, Biome and label heads themselves, Hypho and Xakra. Check out MNK011 here.