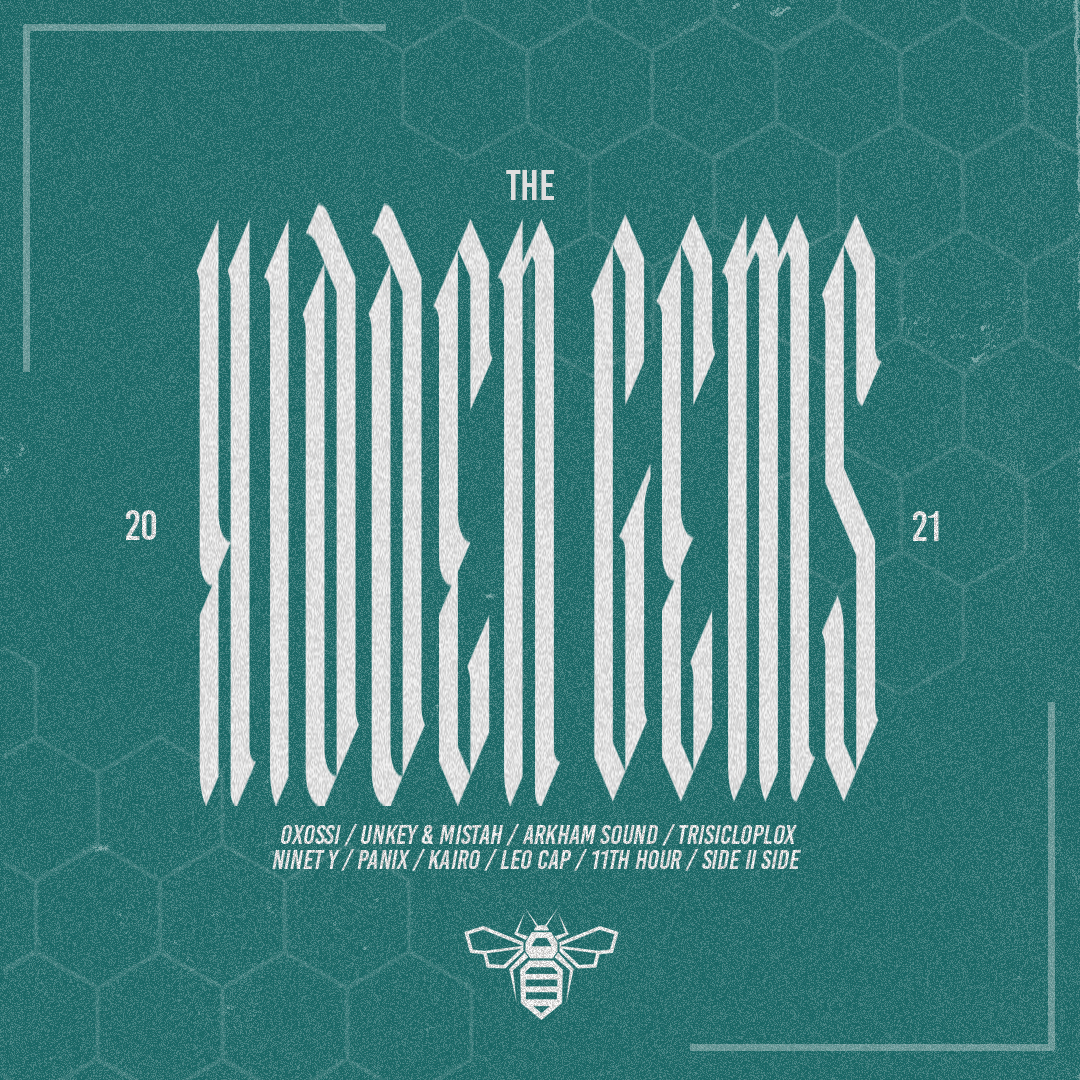 The end of the year is upon us and it’s time to reflect on all of the incredible music that has graced our headphones and sound-systems! When doing so, I really enjoy rediscovering tunes that may have flown under the radar and deserve that extra bit of attention. So here’s a selection of ten tracks that didn’t necessarily play the leading role on the record it released on but in my opinion, could easily have done so.

It could come as a shock to see an Oxossi track branded as a ‘hidden’ gem, but sometimes tunes that feature on huge compilation releases like this one can miss out on some of the accolades it deserves. ‘Wyldin‘ featured on Infernal Sounds‘ stacked ‘Crimson‘ LP and not only is it one of the stand out tunes on the compilation, it’s one of my favourite tunes of the year period! Oxossi has become synonymous with all things wacky and unorthodox over the years and ‘Wyldin‘ is more than a perfect example. From the twisted lead melody to the missile-like mid-punches, the first half offers more switches than Nintendo before screw-face is fully initiated after a disgusting second drop!

“Twisted melodies and absolutely fucked up switches, like many of his tunes, this thing is a hidden masterpiece.”
(The Weekly Buzz – 10/05/2021)

Featuring on ‘Leng‘ EP – Unkey‘s pièce de résistance of 2021 on Uprise Audio – ‘Freak‘ remains an outstanding track. A collaboration between Mistah and Unkey himself, the pair forge pure ice as their sounds whip up one of the coldest 140 environments I’ve ventured into all year. Unkey‘s stark yet powerful bass drives and Mistah‘s unmistakable textures are a seamless fusion. Other highlights include those sharp recurring drum fills and a sobering lead sample taken from the Netflix show ‘Warrior Nun‘, the very definition of vibe setter and one that makes the track so damn memorable.

Arkham Sound has gone from strength to strength this year, enjoying multiple releases on multiple labels. His most impressive efforts arrived on Foundation Audio with ‘Smoke’ EP, featuring this absolute humdinger of a tune, ‘Gravediggaz‘. Amongst four other deliciously dark and abrasive tunes, ‘Gravediggaz‘ plays the role of the record’s energising club banger. A gulf of dark space sits between powerful 808s, allowing the distinctively sharp lead synths to thrive and send shivers down the spines of the dance.

“The ambient synths that riff like a guitar and the punishing 808s encapsulates everything I enjoy in an Arkham Sound track.” (Arkham Sound – Smoke (FA055) [HNYBSS Premiere])

Now here’s a perfect example of a ‘hidden gem’! After experiencing a four track journey courtesy of Sectra and Trisicloplox on the ominously titled ‘Souls Were never Here‘ EP, Trisicloplox‘s final solo effort follows as a digital bonus. Whilst the entire EP is a triumph and a gratifying sound design experience, I’m hypnotised by the relentlessness of ‘Siphon Soul‘s gloomy rolling basslines and piercing tones, to the point where I still find myself repeatedly going back to what feels like the EP’s murky underbelly.

“Ironically, after all of the delicious carnage experienced beforehand, this moody midnight roller may become my favourite.” (The Weekly Buzz – 24/05/2021)

After releasing a slew of remarkable tunes throughout 2021 and becoming one of my favourite producers, I feel like any of Ninety‘s work could fit into a ‘best of‘ list. ‘Skull Thoughts‘ was a track kindly sent to me a long time prior to it’s release and had me hooked from the outset, so it was a relief to see it on a label as prolific as DUPLOC alongside other killer cuts such as ‘Golden Teeth Smile‘. So unequivocally Ninety, ‘Skull Thoughts‘ is mind-bendingly twisted in all the right ways, where the most disturbed melody wriggles it’s way into your skull like a panicked insectoid and the initial ‘violence’ vocal feels like a call to arms.

After it’s release last month, this one is a late addition to the list and one that won’t leave the rotation in a hurry. ‘Sensimilla‘ is the anthemic finale to Panix‘s debut EP on Plantpower, the Londoner’s best work to date. Super thick system-ready subs and classic vocal cuts should get any head swinging their shoulders but ‘Sensimilla‘ is particularly potent; an elevating track that reminds you why you and I enjoy dubstep in the purest sense.

“The tough organic lows and delayed FX that occupies the space feels so pure and refreshing, it’s definitely one of my favourite tunes I’ve heard on this side of the 140 spectrum for a while!” (The Hive – November 2021)

Here we have a combination of one of the years most underrated producers and one of the years most underrated labels. Something special escaped the wintery streets of Vancouver earlier this year and it revealed itself to be a brand new imprint that goes by the name of Obsidian, which introduced us to the mysterious sounds of Kairo. His first of two Obsidian projects arrived in January with ‘Loto‘ EP, featuring three tracks of cosmic darkness. Sandwiched within the trio is ‘In The Beyond‘, a remarkably sinister track involving the craziest low end flutters I’ve ever heard, leading us towards a powerful gut punching switch and sound palette drenched in darkness.

Leo Cap has had himself a year with not one but two mighty releases on the genre’s leading label Deep Dark & Dangerous, so you can see why a track like ‘D A M N‘ could get lost in such an impressive body of work.
‘D A M N‘ featured on the Russian’s first DDD record of the year ‘Let Me Tell You Something‘ EP, and captured my attention at an instant. I’m a sucker for anything that sounds unhuman or alien and right from the fateful ‘why you do this to me‘ vocal sample, I’m sucked in by the distinct energising lead that sounds like a giggling Martian, jittering between similarly unearthly space and texture.

“I’m not one of the most physically expressive of listeners but every time I’ve given this a spin, I’ve always felt the need to buckle up.” (Leo Cap – Let Me Tell You Something (DDD075) [HNYBSS Premiere])

11th Hour must be one of the most active producers featured on Honey & Bass this year with what seemed like a brand new set of tunes hitting the hard drive every month! From his DUPLOC Awards nominated ‘Forensics’ EP on Basskruit, to his final release of the year on Wheel & Deal, 11th Hour is responsible for some of the deepest tunes to come out of 2021 but my personal favourite can be found on his first release of the year, ‘Ashkar‘ EP courtesy of After Dark Music. Lurking within the four hypnotic tracks is ‘Awaken‘, an immersive roller that rightly garnered support early on by the likes of J:Kenzo. Deep yet snappy, rough yet fluid, I realise this is just a drop in the ocean of 11th Hour‘s work, but it’s one that defines the bottomless depth of the Belgian’s expansive sound.

The once Belgian exclusive label Black Teeth Records ventured out of their homeland for the first time, in search of some of the best undiscovered bass worldwide. The multi-genre label landed on Washington newcomer Side II Side for four of his dark and eclectic creations, moving from areas of dubstep to techno in a blink of an eye. A pleasant yet evil surprise emerged with ‘Deception‘, an enthralling barrage of violent bass designs and chilling SFX that lingers long after the first listen!

“An absolute stand out track for me though must be ‘Deception‘, an absolutely gripping slice of evil!”
(The Hive – August 2021)

The majority of these tunes can be heard throughout The Honey & Bass Podcast end of year specials. All of my favourite tunes from 2021 wrapped up into two one-hour mixes!

Massive big ups to all artists and labels who featured and big ups to anyone who’s found the focus and the energy required to put out new forward-thinking music throughout the year! And finally a massive big up to yourself for checking out Honey & Bass at any point! It is always appreciated.