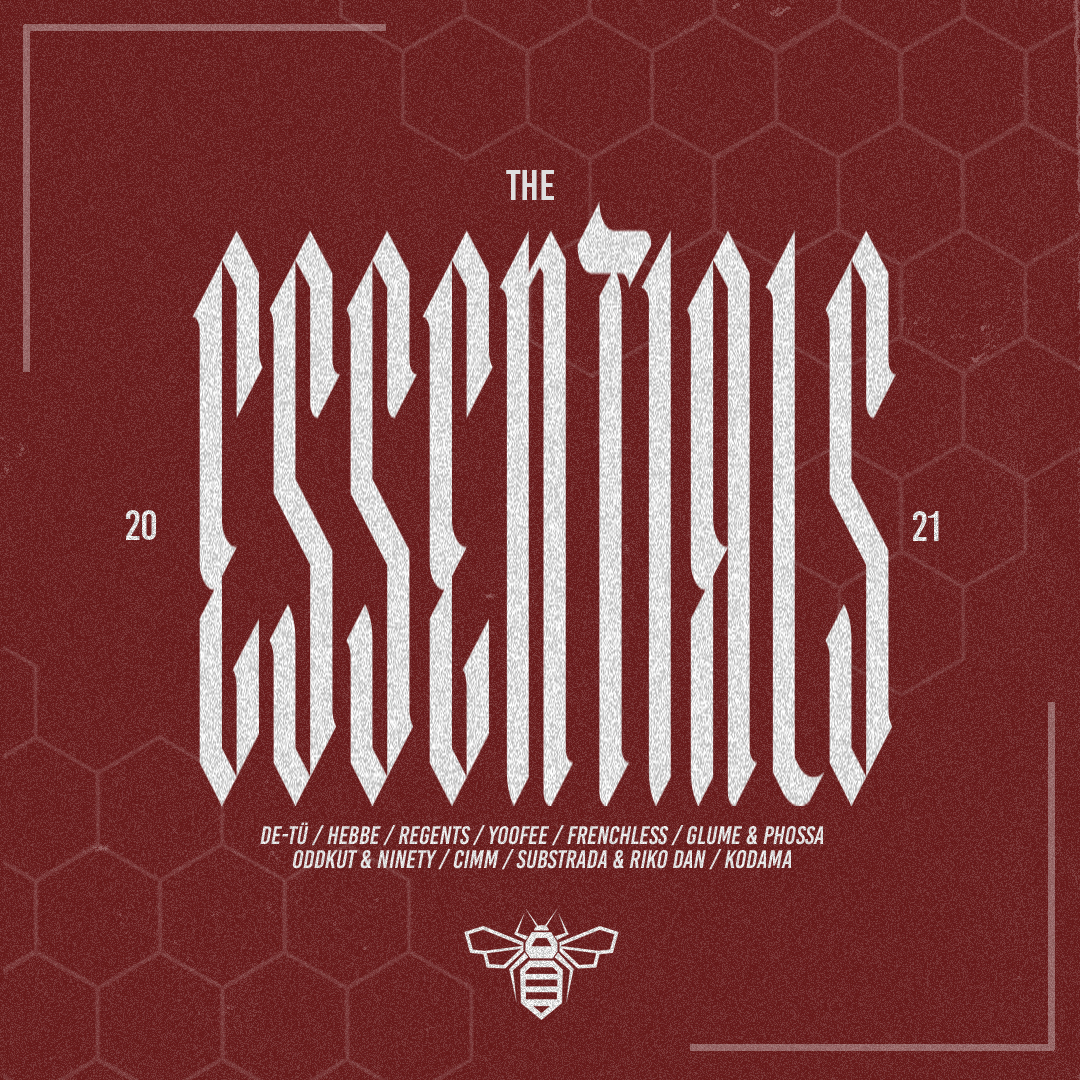 Out of the hundreds of releases this year, it’s impossible to objectively pick favourites. However, out of the anthems, the explosive weapons and the sound system fundamentals, I’ve picked out ten of my most played and most memorable tracks. In no particular order, these are my 2021 essentials!

One of the most anticipated tracks throughout the early stages of 2021 and played by a who’s who of prolific selectors, DE-TÜ‘s foggy ‘Roadblock’ eventually escaped the clutches of exclusivity and onto the swelling catalogue of Infernal Sounds. ‘Roadblock‘ is not just a murky 140 anthem to blow away the dance, but a sonic reflection of life’s experiences over the last couple of years. A four minute capsule of starkness and darkness, born from the usually bustling streets of a roadblocked Bristol, now with a lingering melancholic fog.

Another highly anticipated release finally hit the shelves amidst the rapid rise of Belgian/Dutch label Basskruit. This time it was the label’s co-founder Hebbe who was responsible for one of the year’s most impressive two trackers, fronted by the powerful ‘Low Land Dub‘. Centred around unyielding bass weight and slick percussion that noticeably grows in texture and movement, ‘Low Land Dub‘ captures everything you’d want in a minimal 140 cut in 2021 with a vivid reminder of the genre’s foundations.

“…filled to brim with hooking grooves and screw-face basslines that feel so fresh and original, whilst paying tribute to the archetypal sounds that give us the music we enjoy today.” (The Hive – April 2021)

Word of a UK based MC/producer dream team became reality after finding a perfect fit on the unstoppable Deep Dark & Dangerous! Manchester’s Strategy and H&B favourite Cartridge finally debuted their Regents project with the super stacked ‘Shegry‘ EP. Out of four high level productions, ‘Greengate Adhesive‘ achieved the accolade for stand out track. Strategy is on his absolute a-game here, capturing that sought after mix of poignancy and compelling lyricism with a dangerous flow. As you’d expect, the pin-sharp sounds of Cartridge does the vocal work the utmost justice, reflecting Strategy‘s gritty lyricism with an equally gritty concoction of rough bass drives and slick drum rolls.

Leading a record that was voted into the top three of the hotly contested ‘Best EP Release‘ category on the DUPLOC Awards, like many of Yoofee‘s tracks, ‘Seek & Move‘ brought the groove to 2021. After enjoying a wealth of support from DJs worldwide, Albion Collective took on Yoofee‘s debut project, albeit the label’s sole release of the year. From the distinct vocal cuts to the addictive percussive lead groove, ‘Seek & Move‘ certainly hasn’t moved anywhere since it’s release; still imbedded in my rotation and still infecting the feet of the dance.

” Long held dub ‘Seek & Move‘ finally got the release it deserved, those bouncy body-shifting low end grooves etched into my conscience ever since it saw first light on Soundcloud early last year.” (The Hive – March 2021)

I try not to double up on tracks delivered by the same label but after the remarkable output of Infernal Sounds this year, I simply couldn’t resist! It’s still anyone’s guess on who makes up the recently formed duo Frenchless but what we do know is the pair have the ability to create some of the slickest and waviest 140 around such as ‘3C 273‘, the leading track on their debut release. Once you’ve heard the striking juxtaposition between the dominant drums and gritty lows against it’s distinctive flute lead, ‘3C 273‘ is impossible to forget and leaves you with an unquenchable thirst for more Frenchless hypnotism.

From a fledging duo to one that’s become one of the most prolific over the last couple of years, Glume & Phossa delivered their sole release of the year on Deep Medi. Like most of the duo’s projects, all three tracks that feature on MEDi120 are incredibly intricate and colourful but none more so than the EP’s title track ‘Banshee‘. Responsible for taking the crown of ‘Best EP Release‘ on the DUPLOC Awards, ‘Banshee‘ is outrageously catchy, drenched in a shimmering melody that brings life and colour to any dull day or dark room set.

“Everyone’s favourite duo Glume & Phossa returned in scintillating fashion with what could be considered their biggest achievement to date – a release on the legendary Deep Medi, with long held dub ‘Banshee‘ at the helm.”
(The Hive – April 2021)

With a Russian dubstep take over in full swing, the two men that stand on the frontline joined together for a blistering two track release on Wheel & Deal. At the helm was ‘Gundalo‘, Oddkut and Ninety‘s stupidly bouncy and energising tune that simply wouldn’t (and still hasn’t) escaped my playlist. From the dangerous sub stomps to the addictive drum patterns, it’s 2021’s certified dancefloor killer!

“Like Dubstep’s answer to David Blaine, those rough death defying sub stomps and skull cracking percs often hypnotise, finding yourself in a paralyzed daze of amazement whilst unknowingly swinging your neck like a sledgehammer.” (The Weekly Buzz – 01/03/2021)

With just two other releases on Sentry Records and Daku, Cimm‘s debut on SYSTEM was just one of three appearances this year. But as is the case with all top shelf producers, it really is all about quality over quantity when it comes to the Londoner’s output. Cimm‘s known for his lucid anthem-like melodies but the most striking of them all goes by the name of ‘Accendino‘. Long awaited and the leading track of three on SYSTEM039, ‘Accendino‘ provides a necessary moment of tranquillity amidst another turbulent year. Cimm‘s usually lively and animated work is not only as warm as ever, but comes with a side of melancholia, seasoned with a lo-fi fuzz. The subs are appropriately smooth yet still give the bass bins a decent workout – the perfect recipe for a timeless 140 anthem.

Originally on FKOFd046 after FatKidOnFire caught the surging Belgian producer early, Substrada took his already beefy ‘Calibre‘ and added some steroids to the track for one of my favourite reworks of the year. Still blessed with the iconic vocals of Riko Dan, ‘Calibre‘ VIP was perfect for FKOF’s stacked VIP only record. Substrada shows why he leaves 2021 as one of the most impressive breakthroughs of the year by bringing an extra grittiness to the track, amping up the 808’s to compliment the power of Riko Dan‘s voice.

“This particular variation is probably one of the more striking reworks of the four; a simple yet effective cut with a certain darkness and toughness that matches Riko‘s vocals perfectly.”
(Substrada Ft. Riko Dan – Calibre VIP (FKOFV006) [HNYBSS Premiere])

In another case of quality over quantity, enigmatic label Rarefied only had the one record to add to the books this year but it may be the most beautiful project to come out of 2021. The a-side to the equally magical ‘Honeyed’, ‘2D‘ offered a warm ray of whimsical sunshine to the collections of those that recognises the beauty that’s wrapped within Kodama‘s outstanding work. From the heavenly mixture of harps and synth to the emergence of comforting vocal trails, it feels as though Kodama opens the blinds to let in much needed light on a carefree Sunday morning.

“Kodama feeds the soul with ‘2D‘. A hypnotic track that politely persuades you to close your eyes, count to ten, and lose yourself in Kodama‘s new wave of magic and wonder.” (Spotlight: Kodama – 2D // Honeyed (RARE15))

The majority of these tunes can be heard throughout The Honey & Bass Podcast end of year specials. All of my favourite tunes from 2021 wrapped up into two one-hour mixes!

Massive big ups to all artists and labels who featured and big ups to anyone who’s found the focus and the energy required to put out new forward-thinking music throughout the year! And finally a massive big up to yourself for checking out Honey & Bass at any point! It is always appreciated.